Lynnwood Honda has been providing sales and service excellence ever since the halcyon days of the motorcycle era, when Honda Motor Company pleaded with their dealers to sell "the little economy car." We have since grown to one of the largest Honda dealerships in the Seattle area. We have an award winning service department and the largest parts department in the Pacific Northwest.

Fred Nelson, President, is part of a long tradition of automotive sales. His father, Stanley Nelson Sr., started Nelson Chevrolet in Ballard in 1922. Fred has been in the business since 1935. Fred's children, Erik Nelson and Wendy Nelson Popke, have followed in their father's footsteps, joining Lynnwood Honda in 1984. Stan Sr. knew then what we still practice today: provide a friendly, trustful atmosphere in which to sell and service cars and customers would reward him with their loyalty. 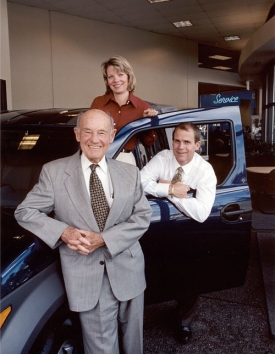